This blog is a place for Me to review classic British films (in particular horror films) by Hammer, Amicus and the like. But I will occasionally branch out and review international films as these are the international counterpart to the British films, some of which will include works by American International Pictures, Mario Bava et al. I hope you enjoy!

The Legend of Harrow Woods

A group of students travel to Harrow Woods; a place that is believed to be where a novelist and his family were killed. As the plot unfolds we learn that a witch was burnt here and put a curse on the land so whoever comes here is killed.

The Legend of Harrow Woods is a House of Fear production. It stars Steven Craine, Rik Mayall and Norman Wisdom. It is written, produced and directed by Richard Driscoll. 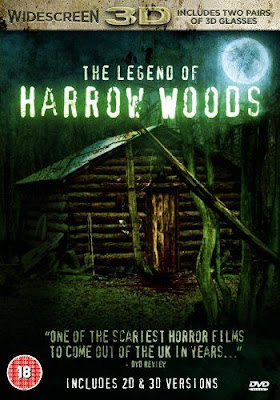 Ignore the bollocks review on the DVD cover.

Since I first heard of this back in 2008 (when it was called Evil Calls: The Raven) I tried my best to get hold of it, I couldn't even get it from the official website. It seemed I had missed my window for getting the limited release of this seemingly good British horror film starring Jason Donovan, Rik Mayall and Norman Wisdom. Then this year (2011) it was released properly on the high street under the new title of The Legend of Harrow Woods. At long last the film I've been searching 3 years for was in my grasp. I got it and have just watched. I am so glad a friend of mine watched it before I did and told me it was bad, because if I was expecting the film I thought it was back in 2008 then I may just have put my foot through my TV. This film was so, so, so BAD that I'm not even going to review it. I'm instead going to write a list of everything that I hated about The Legend of Harrow Woods.

3. Jason Donovan clearly has a PC from the 90s yet he's there running Windows Vista on it.

4. It's poorly made. There are cameras set up in the woods so they can stream their investigation online. But instead of one still camera angle (as you would expect from security style footage), the supposedly webcam footage is the same as the footage we the audience are seeing i.e. cutting from face to face within a conversation completely destroying the realism.

5. The story makes no fucking sense. I was with it at the start then it got to a point (I can't even remember what point) where it just went like a hallucination, at the time I'd been eating Jaffa Cakes. This film left me wondering if someone had spiked my Jaffa Cakes. SPIKED MY JAFFA CAKES!

6. This film is “From the special effects creators of The Shining” I don't remember there being piss poor special effects in The Shining. There's obviously fake CGI rain, shower water and blood splatting on the screen. It's like this film was made using Windows Movie Maker and Paint. Also if you plan to make a film that is a rip off of The Shining then don't advertise that it has any relation to that film as a means of promotion.

7. There's a stupid fireball with a raven's eye in it bursting on screen between scenes every now and then. It's like Richard Driscoll is trying to keep waking up the audience from the boring events of this fucking film.

8. Christopher Waken as the creepy narrator reading Edgar Allen Poe's The Raven. This was stupid for 2 reasons, when he's reading the story there's stupid blaringly loud music that keeps overpowering his voice. And secondly, I like Christopher Walken I really do, but all that happened when I heard him reading was I laughed, if they wanted someone with a creepy voice to read it then why not get the guy who read it on The Simpsons Treehouse of Horror?

9. It also annoyed me that this stars Rik Mayall and Norman Wisdom (in very small roles thank fuck). They are (and were) so much better than this shit. It made me feel that bit better that this wasn't technically Normal Wisdom's last acting role as he filmed his scenes back in 2002. But for anyone who doesn't know and is just casually watching it they'll see it as being his last acting role.

10. And on top of all the shitiness and confusion, it's actually rather boring.

In a sense this has hindered my anticipation for the 3rd instalment in Richard Driscoll's Raven trilogy. At least I think it's the 3rd, some websites say Back2Hell is the 2nd and others say it's the 3rd and that the 2nd was in fact a film called The Devil's Disciple. I don't fucking know, it seems Richard Driscoll's method of producing films is as confusing as his storytelling within them.